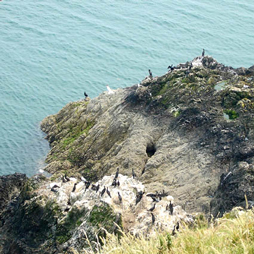 Seabirds are by far the most noticeable inhabitants on Hestan island. Herring gulls nest on the island’s grassy slopes and visitors should mind out for chicks and eggs during nesting season. The cacophony of seagulls is overwhelming. A large number of cormorants can be seen resting on the guano-covered rocks on the south east side of the island below the lighthouse.

Wading birds such as oystercatchers and curlews can be found working their way along the tideline.

A large variety of birds have been observed from the island in the past including Divers and Widgeon.