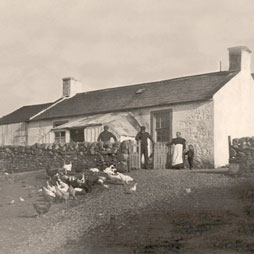 A cottage was built on Hestan island presumably for the early tin miners around about 1841. Throughout its history, the cottage has been lived in by various people including lighthouse keepers and copper miners. There is no running water or electricity in the house, water having been collected from a nearby well.

In the last century a number of tenants have occupied the house – notably the McWilliams, James Houston, and Rev Beryl Scott and her husband. No one has lived on the island permanently since approximately 1960 although the cottage is currently privately let to a family which has a long association with the Island. The Island is still used for sheep grazing.

The most recent development on Hestan was the replacement of the old gas lighthouse with a new solar-panelled one in 1996.