Home » Places of interest » The Cottage 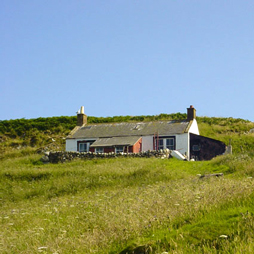 The small whitewashed cottage, which is currently privately let to a family which has a long association with the Island, is situated at the sheltered north end of the island. It was built around 1841 with the purpose of accommodating the original lighthouse keeper. As the lighthouse is now automatic, there is no longer a need for anyone to live there permanently.

Several families in the 20th century have managed to eke out a life on Hestan by working the land. The McWilliam family lived there in the 1930s, James Houston alone in the early 1950s, and Mr and Rev Scott in the late 1950s the latter using it as a base for making church Organs. With no modern services, even today life in the cottage on Hestan would be something of a “Castaway” existence.