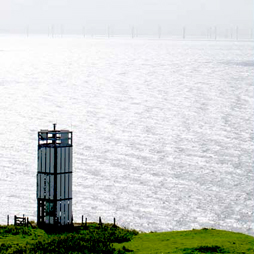 Hestan Island has an automated lighthouse, which is powered by solar panels. It sits on the eastern side of the island and is one of the minor lights managed by the Northern Lighthouse Board.

The first Hestan lighthouse was built in 1893 – it was constructed as a matter of urgency to prevent further loss of life after several ships had been wrecked or had run aground trying to navigate up the river Urr.

The original lighthouse required a lighthouse keeper to maintain the light, which ran on bottled gases, and to clean the lens.These duties were also undertaken by the other residents of the island, if the residents of the Island were on the mainland, they still had to make sure the light stayed lit and make the journey back if it went out.

In the distance of this picture can be seen the new Robin Rigg Wind Farm.